8th Guest Lecture in Creative Media Colloquium this semester with:

How can we create innovative communities in Hong Kong? How can we get people from different backgrounds to work together on meaningful technologies for Social and Environmental impact? How can we get citizens to contribute to art and science on-line and offline in a community space? In this lecture, Cesar Harada will present recent Open Hardware robotics work, environmental sensor research and the latest developments of MakerBay, Hong Kong largest makerspace that will open soon in Yau Tong.

Cesar Harada is a French-Japanese Inventor, Environmentalist and Entrepreneur, currently developing the Protei – a revolutionary shape shifting sailing robot. He is a TED Senior Fellow, Unreasonable at Sea Entrepreneur, Figures of Progress (by GOOD and IBM), and passionate about “Open Hardware for the Environment” with a strong focus on ocean communities and technologies.

Cesar is a graduate from the Royal College of Arts London, Design Interactions Department, and worked at MIT Boston USA as Project Leader, Construction Manager of the iHub in Nairobi Kenya, and recently at Goldsmiths University, London. Cesar won the Hong Kong StartMeUp Grand Award, led the Open-H2O (former Open-Sailing) to win the ARS Electronica Golden Nica [Next Idea] (Austria) and the VIDA awards of Fundacion Telefonica (Spain).

7th Guest Lecture in Creative Media Colloquium this semester with: 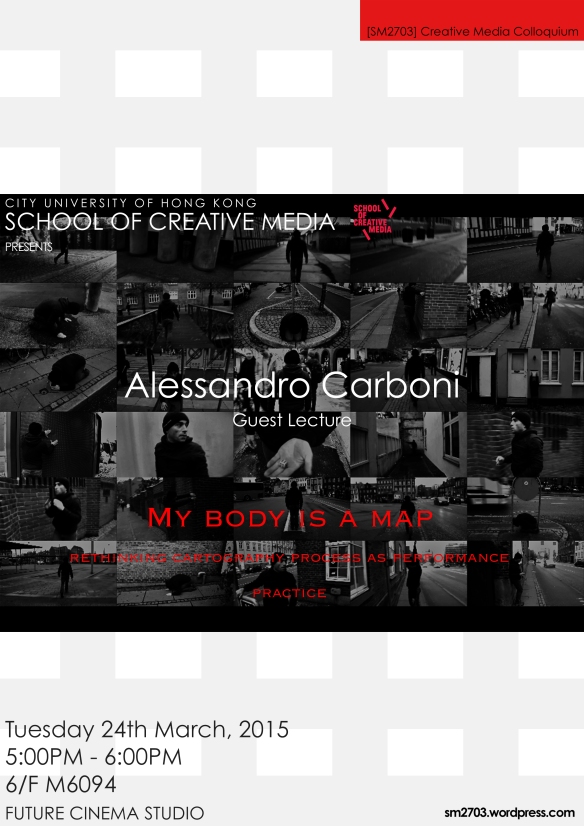 Title: My Body Is A Map: Rethinking cartography process as performance practice

The presentation will introduce Em:toolkit, a system I have developed to help me to answer many of the questions I ask my self as an artist/performer and researcher about cartography as performance practice and how it affects perception, representation and the embodiment of space. The toolkit proposes a set of instructions to capture, extract and embody spatial data. The toolkit describes a cartographic process that applies a new methodological approach to urban mapping based on a reflexive practice invoking the body through a series of steps comprising observation, analysis, extraction and the embodiment of data. The result is a body-action that functions as a map. The presentation aim to open a discussion about the wide-ranging debates about cartography, urban mapping, performance and visual practice.

Alessandro Carboni, interdisciplinary artist, focuses it practices on the body and its relationship with space. His works are interdisciplinary mappings that represent places that he reshapes and weaves according to the different stages stimulated by specific urban contingencies. At the moment he lives and works as independent artist between Sardinia and Hong Kong in which is developing a PhD at the School of Creative Media, City University, Hong Kong.
https://progressivearchive.com

6th Guest Lecture in Creative Media Colloquium this semester with:

Creative coding is the use of computer programming in making art and design projects. You may not think you are a creative coder, but you should become one! This skill will open many artistic and job opportunities and you will become rich and famous! openFrameworks is a creative coding toolkit (http://openframeworks.cc) that was developed within Parsons Design+Technology programs about ten years ago. OpenFrameworks has grown to have a huge worldwide following, and has spread across many countries (USA, Europe, Japan). It is now developing quickly in China. OpenFrameworks is one of the leading creative coding toolkits. It plays an important role in cutting edge fields like new media art, interaction design, the “internet of things”, and robotics.

This lecture will provide an overview of the importance of creative coding to today’s art and design scene, and will review many examples of interactive artwork that has been produced with the openFrameworks creative coding toolkit. A brief introduction to openFrameworks will be included, as well as a primer on how to “get coding” with this fantastic tool. Also discussed will be the ongoing openFrameworks worldwide competition “oFOpen” (yes, you can get involved). Finally, an introduction to Parsons MFA Design+Technology program (New York, Paris) will be provided, including the ways that creative coding is being integrated into Parsons DT research environment.

Sven Travis is a teacher, a researcher, a creative technologist, and a skier. He has taught and administered at Parsons School of Design in New York for more than a quarter century. He founded Parsons BFA and MFA degree programs in Design+Technology, within which he teaches. He is former (founding) Dean of Parsons School of Art, Media, and Technology at Parsons. He has served as faculty in Parsons Product Design Department (Textile Design and Computer Graphics), as Parsons Director of Advanced Computing, as Chair of Parsons Digital Design Department (which he founded), as Director of Parsons Center for New Design (which he co-founded), and as New School Associate Provost for Technology R&D. Travis was raised in Wisconsin and is a lifelong fan of the Green Bay Packers. He was educated at the Rhode Island School of Design and New York Polytechnic University. He is married with two children, and is a proud resident of Greenpoint, Brooklyn. Travis is founding partner of The Fred Group (digitally generated textile printing and design, now defunct), principal of Crazy Baldhead (neural network and fuzzy logic programming applied to interactive media– still rumored to exist– whereabouts unknown), founder of the Beijing Yacht Club (immersive digital installations), and lead researcher within the Mighty Spicy Collective (open source educational technology). His research ranges between art, design, education, and technology. Three of his current projects are “Code, Compose, Collaborate”—a MacArthur DML/Hastac funded project underway in New York, New Delhi, Manila, and Beijing, “openFrameworks Open”, a creative coding project/competition taking place in Beijing, Guangzhou, Shanghai, Hangzhou, and New York, and the “Urban Assembly Maker Academy”, a public high school in downtown Manhattan.

5th Guest Lecture in Creative Media Colloquium this semester with: 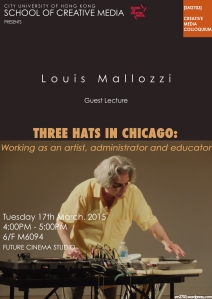 Title: Three Hats in Chicago: Working as an artist, administrator and educator

Like many artists in the US, my working life involves three mutually enriching and occasionally mutually frustrating practices: artist, arts administrator, and educator.  This situation often comes about in the US, in part because art is very badly funded, so artists are constantly trying to invent their own economies.  Therefore one’s involvement and survival often depend on flexibility, adaptability, and a collaborative and lateral approach to work and culture, or work in culture.  I’ll share examples of my work in all three areas – my art-making practice, the programs of Experimental Sound Studio, and the curriculum of the Sound Department at the School of the Art Institute of Chicago — and articulate some of the crossover among them in the context of experimental and exploratory approaches to culture in Chicago.

Louis Mallozzi is an artist based in Chicago. Sound and/or language are often a focus or a launching point for his work. His artistic practice typically subjects ideas, materials, structures, and contexts to impediments, collusion and collision, resulting in installations, performances, media art works, collaborations, and improvised music that take place as gallery exhibitions, performances, or public interventions. Though varying in medium, format, complexity, and presentational context, these pieces as a whole focus on efforts to dismantle and reconstitute sound, image, language, gesture, and signification in order to expose and explore the unstable relationships among perception, mediation, ideology, and image. Mallozzi is on the faculty of the Sound Department of The School of the Art Institute of Chicago, and is co-founder and director of Experimental Sound Studio, a sonic arts center in Chicago.

4th Guest Lecture in Creative Media Colloquium this semester with: 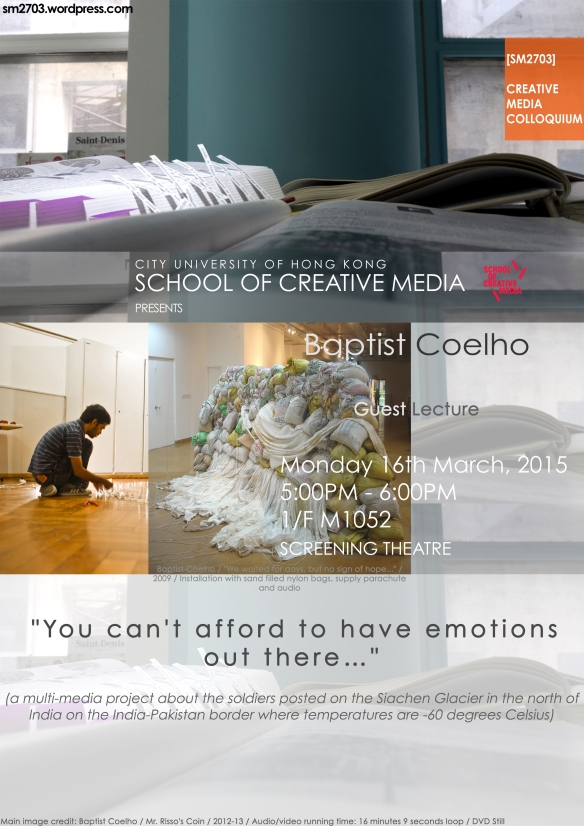 Title: “You can’t afford to have emotions out there…”

Abstract: Since April 13, 1984, the endless conflict between India and Pakistan over the ownership of the Siachen Glacier has been fought at an altitude of around 18,000 feet, which is the highest battlefield on earth. Bitter cold temperatures reaching to -60° Celsius make living conditions unbearable for the soldiers. “You can’t afford to have emotions out there…”. The project focuses on the life of the soldier; not as a machine of war but as a man coping with the day to day complexities of conflict; a soldier with emotions and vulnerabilities like any other human being.

Coelho received his Masters of Arts from the Birmingham Institute of Art & Design, BIAD, UK (2006). He was awarded the ‘Façade Video Award’ (2011) by Art Today Association, Bulgaria; ‘Promising Artist Award’ (2007) by Art India & India Habitat Centre, Delhi and ‘Johnson Prize Fund’ (2006) by BIAD, UK. Solo Exhibitions include Pump House Gallery, London (2012); Grand Palais, Bern, (2009); Project 88, Mumbai (2009); Visual Arts Gallery, Delhi (2009) and BIAD, UK (2006). Coelho has exhibited worldwide in museums, galleries and film screenings. He has also participated in various artist residencies; conducted workshops, artist talks and panel discussions in Asia, Europe and South Africa.In May 2015, he will have a solo exhibition at the Ladakh Arts and Media Organization in Leh, Inida. Baptist is the 2015-16 Leverhulme Artist in Residence at the Department of War Studies, King’s College London. The artist lives and works in Mumbai, India.

3rd Guest Lecture in Creative Media Colloquium this semester with:

Title: 3D Digital Technology and its Applications in Cultural Heritage

3D digital technologies for object and scene modeling have significant potential for a variety of applications including industrial design, virtual reality, intelligent human-computer interaction, and digital heritage. Recently, great achievements in laser scanning technology have made it possible to create high-quality 3D models of complex objects by using dense point clouds and high-resolution texture images. In the talk, I will give an introduction to some of our efforts in applying the 3D digital technologies in archaeology and digital heritage. I will focus on a number of pilot projects we have undertaken for grottos in China, including Longmen, Maijishan, and Xiangtangshan. The main purposes of the projects ranged from 3D model assisted sketch generation for archaeologists, virtual reconstruction of historic sites and relics in grottos, to applications in digital museum.

Hongbin Zha received PhD degree in electrical engineering from Kyushu University, Japan, in 1990. After working as a research associate at Kyushu Institute of Technology, he joined Kyushu University in 1991 as an associate professor. He was also a visiting professor in the Centre for Vision, Speech, and Signal Processing, Surrey University, Unite Kingdom, in 1999. Since 2000, he has been a professor at the Key Lab on Machine Perception (MOE), Peking University, China. His research interests include computer vision, digital geometry processing, and robotics. He has published more than 300 technical publications in journals, books, and international conference proceedings. He received the Franklin V. Taylor Award from the IEEE Systems, Man, and Cybernetics Society in 1999, and Best Paper Awards in Euromed 2010.